Ahh... the 1500m. The golden event of the track and field portion of the Olympics. In my humble, (very) amateur opinion the 1500m is unquestionably the hardest distance to race (the 800m is a very close second). For you essentially need to be one notch below sprinting for 3 and 3/4 laps of the track. You're undoubtedly in a lactic-acid haze within a lap and just holding on for dear life - which probably feels like it's about to end with each passing meter. There's not too many fresh faces after a 1500m. In any case, let's recap the North American hopefuls heading to London. Sadly, the tough Canadian standards were overcome by 3 athletes at this distance.


26-year old Winning, Manitoba native continued her recent successes in the past year with a 3rd place finish in the Canadian Olympic Trials earning herself a trip to London after running well below the 'A' standard with  blazing fast 4:04.76 in San Diego, California just 2 weeks ago.

The veteran is at it again. At the youthful age of 30 years, Hilary showed the rest of Canada how it's done by placing 2nd at the Canadian Olympic Trials to seal the deal and I'm sure her bags are already packed in anticipation. In May, Hilary cleared the 'A' standard during an European meet in Rome, Italy in 4:05.08.

Just to tell you HOW RIDICULOUS the Canadian standard is, only 5 American women went under 4:06.00 this year - remember that USA is a 1500m superpower.


As to who from American will be travelling to London, it was a no brainer. In the Olympic Trials final we had the 2011 World Champion - Jenny Simpson, the 2011 World #1 based on race rankings - Morgan Uceny (note: Morgan would have been the 2011 world champion if she didn't fall in the final race), and the 2009 World Championship bronze medallist - Shannon Rowbury. It wasn't even close, it was just a matter of what order they would finish.


Raise your hand if you're going to London for the 1500m...
Pictured above is one of Canada's most prolific track and field runners - Nate Brannen. I first heard of Brannen when I read Chris Lear's book 'Sub 4:00: Alan Webb and the Quest for the Fastest Mile'. Brannen, now 29, was a teammate and training partner with America's fastest miler, Alan Webb at Michigan State University. Although Webb has a faster mile (3:46.91 vs. Brannen's 3:52.63), Brannen will be heading to London this year - Webb will sadly have to watch his old partner take on the best in the world for 3 and half minutes.


Brannen ran a personal best time of 3:34.22 on May 27 in the Netherlands to comfortably dip under the 3:35.50 standard. Then, to seal the deal he took home the gold at the Canadian Olympic Trials.


It breaks my heart that Taylor Milne (2nd place in the picture above) didn't make the Olympics. From what I've gathered, there is no one who trains harder or races harder than Milne. I've watched countless videos of him putting his heart and soul on the line and always pushing the pace in every race. I hope he continues his quest for Olympic glory.
---------------

By far the most anticipated event of all the USA (and even Canadian Trials) as there were 4 big names, but only 3 can go. Like the female race, there were many decorated runners vying to not win, but to not be 4th! Matt Centrowitz won bronze at the 2011 World Championships, Leo Manzano a 4-time medalist at the USA championships, Andrew Wheating who is the 2nd fastest American-born 1500m runner, and the young gun Robbie Andrews who is known for his vicious kick.


All of these men have 1500m personal bests well below the Canadian and American standard. But in the end   it seemed experience won out. Leo Manzano won his first, and well deserved, national 1500m title which couldn't come at a better time. 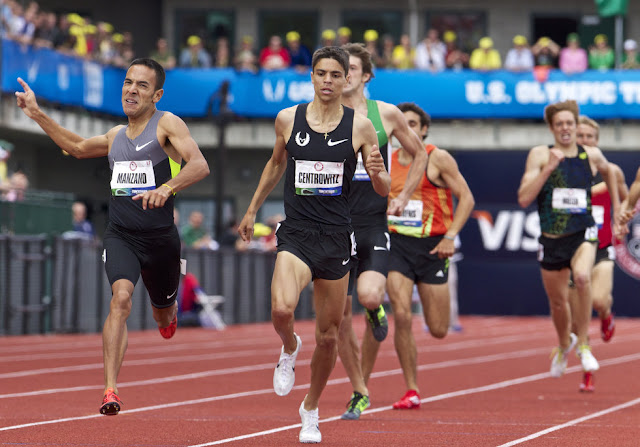 ** As much as I would love to see any of these 4 North American males, they quite frankly have zero chance against the Kenyan superstar Asbel Kiprop (his resume is just outlandish... see here) has already run 3:29.78 this year. While his fellow Kenyan Silas Kiplagat has run faster 3:29.63.
Posted by Mark Hayward at 20:30