First, it needs to be noted that in order to get a trip to the Olympics you need to:
1) Have the Olympic 'A' standard - specific to each country
2) Finish in the top 3 in that same event in the country's Olympic Trials
* Canada has a few other weird rules like: if you hit the 'B' standard twice between April 1 - June 30, 2012.

The 22-year old North Vancouver, B.C. native and Simon Fraser University alumni (and significant other of speedster, 2016 Olympic hopeful Ryan Brockerville) has punched her ticket to London, England after a 3rd place finish at the Canadian Olympic Trials this past weekend in Calgary, AB.

On June 10, she competed at the famous Harry Jerome International Track Classic in Vancouver. She didn't disappoint with her friends and family in attendance. She not only won her 800m final, but she dipped under the 'A' standard with a time of 1:59.86. The 4th fastest time in Canadian history!

The 23-year old from Eganville, Ontario (1.5 hours west of Ottawa) decided to take a year off of school post-undergrad to focus 100% on making the Olympics. Obviously her plan was successful as she will be heading the London after her 2nd place finish at the Canadian Olympic Trials. She broke the 'A' standard on June 1st at the Prefontaine Classic in Eugene, Oregon with a time of 1:59.82 in what I believe was the 3rd fastest time ever for a Canadian Female.

These two young superstars will be in tough this year at London (current world leading time is 1:57.93) but have the ability to be in the mix. Undoubtedly they will gain some valuable experience which will help them in 2016 when they will hopefully re-live their Olympic dream in Rio de Janeiro, Brazil.

*I'd like to give a shout out and my utmost respect to a friend, and inspiration, of mine Julia Kawamoto (nee Howard) who chased her Olympic dream in the 1500m and 800m. Unfortunately, Julia didn't achieve the results she, and many others, had hoped for. Regardless, I'm incredibly proud of her for going after it. No doubt, this journey has made her (and others who won't be travelling to London) a stronger runner and person all-around. Now, I hope she takes all that kick-ass speed and moves up in the distances to have total world domination!

USA is known for their running prowess from 100m right up to 1500m they are a force to be reckoned with. Their 800m Olympic Trials final was blisteringly fast from the gun. The eventual winner was Alysia Montano who went through the first 200m in 26.5s and 400m in 55.9 (!!) - that's faster than most male races! Note the ages of the American women. Much older than the Canadian contingent! Who says you get slower with age?!


Due to Athletics Canada ridiculously harsh qualifying standards, no Canadian males have hit the 'A' standard this year. Andrew Ellerton ran 1:45.04 last season, but that doesn't count in the process.


However, Canada will send one male to London for the 800m. Halifax, Nova Scotia's Geoff Harris earned a RISING STAR Olympic position by running under 1:46.30 twice in the last month and winning the Canadian Olympic Trials! He took the roundabout way, but no matter how you cut it. He's an Olympian. 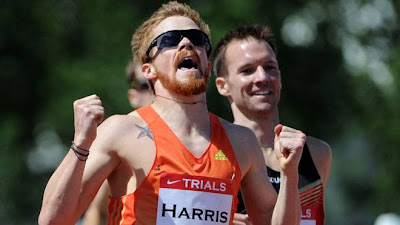 Like the women, the USA males showed their 800m dominance. Their top 6 finishers all broke the Canadian 'A' standard. With Nick Symmonds winning his 5th straight 800m American Championship and gaining his second trip to the Olympics.