As we've mentioned a few times in this post, if you want to make the Olympics you have to:
1) Hit the qualifying standard
2) Finish top 3 in the Trials

Well American decathlete (10 T&F events with points awarded for each event) Ashton Eaton decided that process was a little too easy. He decided to set a world record in his first of 10 events, the 100m. He covered the 100m in 10.21s, which absolutely ridiculous as many sprinters who train solely for that event can't run that time! Not a bad start...


However he had to complete 10 events, with 9 left to go he could have put it into cruise control and just booked his ticket to The Games. Alas, that would be too easy. So he decided to SET ANOTHER WORLD RECORD IN HIS NEXT EVENT - Long Jump.  Where he jumped 8.23m! 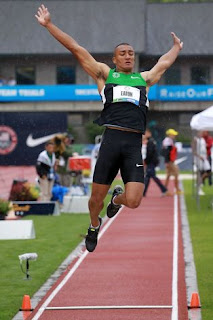 With TWO world records in the bag, he could probably not even show up for the rest of the 8 events and still make the Olympics. He opted against that choice and decide to punish the next 7 events, building a dramatic scene in the final event - the 1500m. If Eaton ran a 4:16 he would have THE WORLD RECORD for the Decathlon. So why not... With 400m to go, Eaton was in striking distance, needing 'only' 64s to get another 'WR' next to his name. After an incredible 9 events Eaton capped it all off with a 62.26 last lap to become the best Decathlete...ever.

[Note: Eaton was in 2nd place in the 1500m on the final 100m but Curtis Beach, the leader, slowed down
to let Eaton actually win the 1500m to make it all the sweeter! Classy move]

In probably the 'weirdest' result of the entire USA Olympic Trials was from the Women's 100m final. 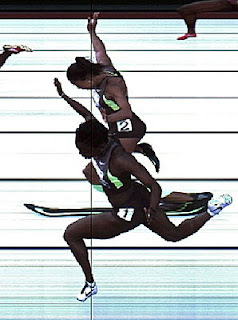 Tarmoh was declared the winner by 0.001 of second (no, there's no type... that's 1 one-thousandth of a second). Tarmoh went to the press conference elated to be the 3rd place finisher, however that was all to change. As an hour later the race between Tarmoh and Felix was declared an OFFICIAL DEAD HEAT. See the explanation of that decision by the official timer Roger Jennings here.

Obviously everyone wanted the latter option and that were granted such a wish as the runners on Saturday agreed to compete in a 100m run off on Monday. However, on Monday morning Tarmoh bowed out and conceded her position on to Felix. Reasons aren't clear as to why, but she may have felt exhausted from the week of racing. Felix will travel to the Olympic Games with Tarmoh as an alternate.